The central visual theme for our building at Amarula Campsite are Arches and Domes.
In my deliberations about a suitable roof structure that doesn’t involve wood (there are no large trees in the area that can produce lumber or long, straight structural pieces) I explored the idea of domes and vaults. It made sense: Handmade, fired bricks are available in the village, clay for mortar is on site – all we were missing was the expertise to build.
After some searching I realized that dome-building is part of biogas digester construction which is quite common here. So contacting one of the biogas companies in Arusha lead to the contact with our “fundi” Petro Omala and his son Goodluck Omala- both experienced and open to the challenge of our project.
First we needed a support structure that was able to span the 2+m opening between the kitchen and sitting room: the Arch. This arch had to be strong enough to carry one side of the sitting room dome and the south edge of the kitchen Vault. Petro recommended using cement mortar for its higher compressive strength, and suggested pointing with clay later.

Our layout includes several part circles, so my question was all along how to go from that to a circular shape for the dome: turns out the shape does not need to be a perfect circle. It is important that there are no straight edges though so that the forces can always press toward the center.
The sleeping room dome was built first- a radius of about 1.4 m.
The bricks were laid on edge- this reduces the overall weight of the dome. Layer after layer gets built with ever increasing tilt to the center. The clay mortar forms a strong bond with the bricks after a few seconds.

And this is the secret to the building of a dome: Hold the bricks in place with special hooks until the mortar dries a little or until the layer is complete.

Let me mention here that cement mortar would not work well because it is not sticky.
Attention must be paid to the edges of the bricks, and it is important to have mortar in all joints

We chose to finish each dome with a bottle at the center, allowing light to come through and light up the ceiling a little.

bottle at the center

The larger dome of the sitting room was also built “free”- meaning without the guide of a radial stick. This was necessary because of the irregular shape of the plan, and made it difficult for our learning builders to build more than the first rows of the dome.
The following pictures show some of the scenes at work:

Master and student on the dome

working together on the dome

domes complete, preparing for the vault

With the domes closed our final task was to build the Nubian Vault over the kitchen. The technique of this type of vault relies on a strong end wall on which the first courses of the vault lean. This allows the builders to construct the entire vault without formwork.

Laying out the Nubian Vault's curve on the supporting wall

Start of the Nubian Vault

For the vault the bricks are laid “standing”. Two people work on either side and build the following bottom courses while the complete course is left to dry. Then both work together to complete each arch, supporting bricks for each other.

the opening of the Nubian Vault

The West end of the Vault is met by a half dome: note the changing direction of the bricks in the following picture:

closing from Vault to Half Dome at the West end

To complete the roof we now have to plaster all surfaces and then build gutters and good drainage. Watch for follow up posts in the near future.

Cob week for the Natural Building Skillbuilders and we’ve been building a Root cellar for O.U.R.Ecovillage.
Cob is still my favorite way of building: I simply feel happy as soon as my hands get into it.
This time around we have high production energy on the site. The goal was to get these walls up by the end of Friday and it was done by lunchtime.
The cob was made up by a bobcat and the group is packing it onto the walls in tall lifts- following a technique that Gord Baird from eco-sense shared with us. This technique allowed us to finish the walls of the first room in 4 days- and that included our learning curve!
Now new terms like “Baird Cob” and “power lifts” are floating and once again we see how there’s always more to learn and try out.
We’re playing with some sculptural detail as well: gargoyles surround vent pipes, buttresses and more.

Located on a North Slope, we started with a rammed tire foundation and retaining wall against the slope. This building will be earth sheltered on the South Side, is shaded from the east and west and we’ll give it good overhangs on the exposed sides.
Once the walls are finished we plan to lay a reciprocal roof structure and build up a living roof for more protection from sun exposure.
Doors are big enough to bring a wheelbarrow in: we imagine sacks of potatoes, crates of Apples and plenty of other delicious produce from the garden to be kept here in the winter.

Lately it seems that most of my time is spent at the computer: planning, writing, communicating, sketching, and even some entertainment courtesy of youtube and TED.
So when we took on a house-sit near Duncan the one main concern was: can I get online?
We’ve been here for a few days now and I am getting used to the sounds of the house, the vistas and the abundance of space. I notice that I move from kitchen to upstairs office to kitchen to bathroom to office to kitchen etc.- and I don’t spend much time in the other areas of the house.

Here’s an exercise I do with participants of my workshops: Draw a plan of your house and trace with a pencil your daily movements. You will notice which places are always visited and which only rarely. Some never get used! Try this for your place and let me know what you discover.

Of course, coming from a 300 squarefoot living space into this ? squarefoot home is triggering all sorts thoughts.
So far I really like:

So while this Sunday is rather stormy outside I will now return to other pages on my computer….. 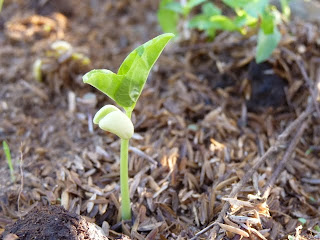 It only took a couple of days for our seeds to sprout . I planted some cowpeas earlier this week and now they are up and growing on the “fence”. The Mchicha greens also show and now I’m watching for the Zucchini.
It’s the presence of water that creates the magic of course. We use a lot of it at the Shamba:

Part of what we’re trying to do is get more use out of the water by setting up greywater systems from every building so that used water from sinks and showers gets distributed for irrigation.
Our “Banana Shower”is the first step. We all enjoy the beautiful set up in the middle of the garden and the plants will love it too.

The kitchen building will be sending its waste water to the garden as well. I am looking  for a simple solution for distribution of water without small parts (as we use in drip irrigation). Send me ideas! I look forward to having the books from Oasis Design to help us make decisions. Thank you Art!

Back in the garden: we are now preparing beds for more planting: layering seaweed and manure under mulch, and letting this sit for while before we plant.
Gabriel split a cluster of lemongrass and now we have several new starts which will provide us with lovely flavored tea. It’s pretty exciting to be part of all this!

The design for the kitchen is finalized and we will break ground on Monday- first by digging up a banana cluster and transplanting it.
The building will have a core storage room, a dishwashing area, cooking area, watchman’s station, shower, and upstairs a sleeping place for one of the staff. It will be located at the entrance to the “compound” with a fence connecting to it in the future.

Making the trip to Bagamoyo town is not a big deal- the hardest part is making up my mind!
Today we all went in for a birthday pool party at the Millennium resort. A great excuse to lay on a lounge chair and read a book while the children were playing in the water with the current volunteers from Baobab. I slipped away for a dip in the ocean: it was warmer than the pool, salty and pretty choppy water. Yes its the Indian Ocean- you gotta love it.
Good timing for a day in town: this morning we found that we had no water at the site- and there’s that topic again….

Some weeks go by quietly without outstanding events. People go about doing their work, no big storm or other weather event happens and suddenly we find ourselves at the end of another seven days.
Maybe I wasn’t part of things so much this week.
You see I have my own design and consulting business here and at this time when the building season is coming close, I try to wrap up my design projects so that I can be free to go outside to build and teach at the end of May.
My office space is visually not connected to the commons- that helps me not to get too distracted by the general activities and comings and goings. It is located at the north side of the Art Studio and looks out onto the wetlands and to the West overlooks the new garden area. Working in a natural building surrounded by the sounds of nature is something I appreciate every day.
Add to that the fact that I don’t have any travel time to work and suddenly there’s space to give work time to the general operations of the ecovillage.

A contributing factor to the general quiet here was that a few of the men from our group went to a Warrior training of the Mankind Project this weekend. In community that means those who are left behind pick up the slack where necessary.
We’re happy when they return: nurtured by the work and deeper connection to each other. And with that I direct my attention to my partner who just arrived.