It took hours to get out of Arusha; picking things up , shopping, waiting for people and traffic.
Finally, around 1 we left town towards Kondoa region. Along a new paved road it was easy driving at first. We were crossing Masai land, where round houses in clusters dot the landscape and herds of cattle move about. Occasionally we got dangerously close to a goat or a cow crossing the road as we sped along in the Land Rover. Donkeys are plentiful too: Masai 4×4 Seppo said.
Then the pavement ends and we drove alongside road construction for what seems like hours. Rough, bouncy, dusty- I was glad for the 4×4 vehicle and Seppo’s knowledge of the road.
The houses we drove past changed:  square little brick houses with small fenced yards lined the streets in the villages. In the distance the edge of Ngorongoro park.
On fresh pavement again: We reached the town of Babati. “No Mzungus here”said Seppo. There’s a lake and a hotel on the edge of it- green grass, tables, a bar. Feels like an oasis after the drive. We ordered two beers and stretched our legs. There are hippos in this lake , about 300 or so. Local fishermen will take tourists to see them by canoe. 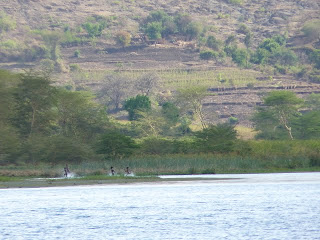 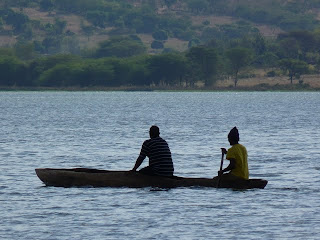 We didn’t have time for that- another couple of hours to go before we would reach camp. But before  leaving town we went to the market for some fresh vegetables. Not much to pick from: Onions, potatoes, tomatoes and Mangoes. Dried goods in little shops surrounding the stands.
Leaving Babati the road becomes dirt road- good solid red earth. The rich color makes my heart sing. The road winding its way up through small settlements and rich treed landscape offering views in the distance of valleys and finally to the North the evening light on the Masai Plains. Breathtaking. Not much further ahead lies the camp also overlooking the plains and the Village we now are part of: Mnenia.
My excitement kept growing with every move. Seppo pointed to the tents and set me up in the big Safari tent- with a bed!
Soon it got dark and we sat with a few Kerosene lamps and a couple of solar lights. Costa, the builder who is here, made some food and then another surprise: Full Moon rising over the Eastern horizon. The beauty of the moment brought tears to my eyes.
Early to bed, the night was cool and in the morning I was looking for some warmer clothes. A few hours into the day the heat comes back and we look for shade again.
Morning visit to the village. Seppo has been working with a group of women on a project that will have them produce briquettes made from plant waste. They will also make paper and be able to generate some income from these.When we drove up there was great excitement.  And much laughter as we struggled with languages. We have a young interpreter with us who patiently relates what we have to say.
The building that the women are using is located next to a water tap. Village water taps are where women gather- carrying water in buckets on their heads.
Later yesterday we met again with the group and presented our idea for a small store next to the tap to have as selling point for anything they produce: paper, briquettes, pottery etc.
They loved the idea and got really excited when we suggested that we build it together without the fundi- the tradesman we always seem to be waiting for. It will be us and the women starting next week after two volunteers arrive.

The price of things

Want to join the discussion?
Feel free to contribute!

Going back to Mnenia
Scroll to top